The cookie icon really annoyed me, so I changed it (with one from the fugue icon set by Yusuke Kamiyamane[/url] - CC SA). Then the flags (using the [url=http://www.famfamfam.com/lab/icons/flags/]fam fam flag icons), then some browsers ('cause they didn’t have transparency) even found a couple of new browsers, which weren’t there etc. 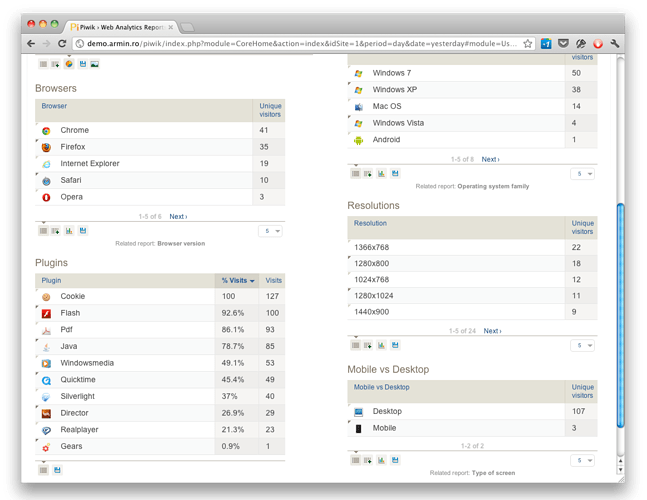 So why should you install these?
Cause they are updated app icons with transparency (which might help some designers in the long run)

Is this a complete set?
Certainly not. Some help would be appreciated (linux / windows browsers).

Why is there a functions.php?
I changed the 1.8.2 realease file, so that it looks for png’s first and serves gif’s if there aren’t any. This means you just have to delete the png’s (no the flags though), to revert to the original setup; also, it’s easy to add new icons.

Why 16x16px icons?
Easy. Thta’s a standard for computer icons (if an App doesn’t have this size, it will have a multiple of it) and it’s also the favicon size on most websites (some have multiples as well). Meaning it’s easy to get up-to-date icons, which look good on small sizes (e.g. the android icon is actually the favicon from android.com).

Thansk for your work on this one. Unfortunately the reason we used non transparent is because the PDF I think do not handle images with transparency. I agree it currently looks ugly… Do PDF with icons work after your changes?

Yes, icons work. Though some seem cropped, e.g. the cookie - I assume to 14x14px. I’ve attached a report

Good to hear it is working with the transparent icons. Do you think your changes to icons are final, ie. complete?

If you don’t mind creating a ticket with your latest icons set changes, on dev.piwik.org we will defintely investigate!

The UserSettings images are very much incomplete. The ones I added, I don’t think need changing though.

I’ve completed the UserCountry flags (some were missing) and created a ticket for it here:

The current flag icons seem really dated. Thus I replaced them with the flags by… [famfam](http://www.famfamfam.com/lab/icons/flags/). Some were missing (e.g. unkown, antarctica, soviet union), so I created those myself. I'm also wondering, if some flags are still used (e.g. Yugoslavia) Preview: http://imgur.com/HGGOh All images were optimized, meaning the new set is also about 47% smaller.

Hope this makes it to core

The reason for non-transparent was because transparent icons requires more memory for tcpdf. This might be fixed in a newer version of the library but I have not had time to investigate.

Well, the flags, which is a complete set, don’t have transparency, so can we have them added?

Also, how bad is the memory usage? Considering PDF’s aren’t generated continuously, whereas you have to look at those icons every time you load a page.

Indeed, we could also add your other icons, maybe the memory issue has been fixed. Did PDF reports generate OK with your new icons?

Also would you have a screenshot of the country table with the new flags?
Thanks for your suggestion & patch!

I don’t have a country table, do you need me to create one?

Thanks - by country table, I meant add the User Country report in the PDF - do the country flags display OK in the PDF?

yes, they display fine. I can’t attach the pdf here, because the file size limit is 200K and the pdf is 390. So have a look at the pdf attached to the ticket:

The current flag icons seem really dated. Thus I replaced them with the flags by… [famfam](http://www.famfamfam.com/lab/icons/flags/). Some were missing (e.g. unkown, antarctica, soviet union), so I created those myself. I'm also wondering, if some flags are still used (e.g. Yugoslavia) Preview: http://imgur.com/HGGOh All images were optimized, meaning the new set is also about 47% smaller.

I’m a few years late, but I have redone most of the icons in piwik. If you have some time you can find them here or wait for the next piwik release (3.0.1) which will hopefully include them.

If you have ideas for better icons or high resolution images of the few missing ones just message me.

Wow, it’s been 4 years already! Thanks for fixing the icons!

Unfotunately I don’t have any of the missing ones.