Interested to proceed with Matomo product, upon scanning the matomo 4.13.0 on-prem-edition with Sonatype for security, several vulnerabilities were identified.
Major one being the usage of Angular JS version 1.8.2. and other includes jquery,material css.

Requesting Matomo team to provide suggestion on this restriction.
Is the matomo server version depends on these angular libraries or it can be removed to use matomo without those feature?
Is there any recommendation from matomo to eliminate this situation
Can these dependencies upgraded to other Angular/jquery version ?
Is there any roadmap from Matomo to upgrade these ? 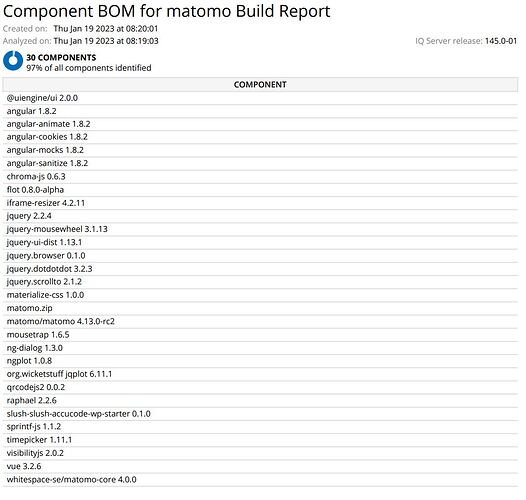 In these examples I am able to mask what I’m doing and the expression passes the ensureSafeAssignContext checks.

The application is vulnerable by using this package along with allowing users to control the content of Angular templates and relying on the sandbox for code execution prevention.

Each version of Angular 1 up to, but not including 1.6, contained an expression sandbox, which reduced the surface area of the vulnerability but never removed it. In Angular 1.6 we removed this sandbox as developers kept relying upon it as a security feature even though it was always possible to access arbitrary JavaScript code if one could control the Angular templates or expressions of applications.
Control of the Angular templates makes applications vulnerable even if there was a completely secure sandbox: