June 27 was the last day Piwik 2.16.1 tracked any data. A few days ago I began wondering why the days started showing 0 for all stats. The Visitor Log only shows “There is no data for this report.”

There were no changes of any kind made to Piwik. There was one minor edit in Apache 2.4 for the Piwik host from Require all allowed to Require all denied just so the Piwik login would not be open to the world. To rule out any issues with this the change was reverted but Piwik continued to not track data. Here is a graph showing the steady decline. 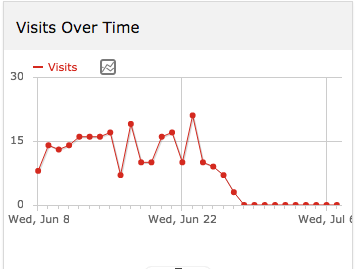 I thought this Piwik problem was similar to [SOLVED] Piwik stopped tracking / Actions > ‘There is no data for this report.’ (Piwik 2.15.0), but changing the data type from int to bigint made no difference. I deleted my own tracking cookie in Piwik so my own visits could be tracked just to help quickly determine if it would begin tracking again.

Here is what I have done so far with no change in reporting behavior.

I think I have exhausted most things I could think of and come here to see if anyone can shed some light on this situation.

do you see data in Visitors > Visitor log? if so , it means your data is tracked properly. The problem would be with the archiving then.

if you have no data in the Visitor log then data is not tracked properly.

Thank you for your response, matthieu.

I see no data in Visitors > Visitor log – only “There is no data for this report.”. The strange thing is data was being tracked for several months before June 27 when it stopped tracking. The tracking code is still the same has not been changed.

This has been resolved.

After cross checking all events for June 27 it turns out the problem was due to an Apache config change. Require all granted was changed to Require all denied

This was done in an effort to prevent unauthorized users from accessing the Piwik login page. Instead of using a traditional .htaccess to password protect a web directory, I have been using LDAP authentication for different web directories successfully, but I can’t figure out why piwik won’t prompt for authentication when providing the path to piwik in Apache. Only thing I could think of is I would need to specify a different subdirectory where piwik lives (/path/to/piwik), but I don’t think this is necessary. I have been following this issue Lock down accounts by IP after N failed attemps at logging · Issue #2888 · matomo-org/piwik · GitHub but would like to implement some solution in the meantime. Open to suggestions

So the issue is resolved and was unrelated to piwik itself. Apologies for the noise.